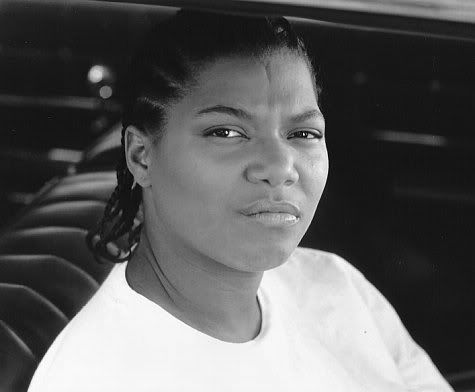 A thread of coincidences: a film ending from my late ‘90s childhood, a song from a talk show late last year, a magazine article minutes ago. This is how they gathered.

I was surfing my Google Chrome recommendations, one piece opened into another, and I clicked on this listicle on badass Black women film characters. I clicked on it thinking I’d read it before. I scrolled down the list, wishing it were more detailed and expansive, and stopped at a photo of Queen Latifah, a black-and-white photo of her in what seems a car, and the memory hit me.

When I was a child in the late ‘90s, I watched a lot of films. Some of them have remained in my mind, a few more than the rest. One that stood out even then, for the pain it caused me, was a film that, towards its end, had a Black woman gunned down on the road by the police as she stood in front of her car. I remembered she was a robber, the leader of a robbery gang of Black women. I remember one or two of them were lesbian. I remembered her coming out of her car, standing in front of it, and a hail fire of bullets hitting her. Even as her body convulsed, she stood bending backwards. It was a horrible way to die, even on film. What made it tear more was that, in the next clip, I remembered one of her gang sisters crying on a bus, watching the massacre—yes, there is such a thing for me as one person being massacred. Her gang sister escaped. No: the leader died so her gang sister could escape. I think I was brutalized by that scene.

I stared at the photo of Queen Latifah and it all came back to me. Above the photo, the film’s name: Set It Off. The name triggered a fun memory for me from last year.

Last year, when Kamala Harris became the U.S.’s first female and Black vice president. I was following a string of talk shows, and I think it was on The View that they played a clip of Harris’ sorority sisters doing a dance in her honour. A song was playing that I really liked, which meant that I kept trying to Shazam it for days, and failing. Then I finally got it. The title: “Set It Off,” by Strafe.

Seeing the name of this film that brutalized me brought back the song to me. I went to play it but I no longer had it on my phone.

I Googled the film, read the synopsis on Wikipedia just to confirm, and spent a minute deciding whether to watch the next thing I Googled: “Set It Off Cleo’s death scene.” (To be fair to me, I typed “Set It Off Cleo” and Google gave me that option and I clicked.) What kept me was memory: Would the scene still hurt? Too much? Faintly? Why the heck was I even here if there was a chance that it would hurt! (You have to understand: some film deaths scare me and stay with me and won’t let go.) In the end, I won, and I watched the clip.

It didn’t hurt at all. Also, my memory of it was more terrifying than what actually happens: Cleo doesn’t get gunned down in front of her car—it happens right at the door, as she gets out and starts shooting first. But saying that it didn’t hurt is not to say that the pain isn’t still poignant: it will take me time to forget Cleo lighting her last cigarette before driving into and past blockading police cars.

There is a different memory I associate with that film Set It Off. It is another film called Most Wanted. Yes, that one from Nollywood. People from the ‘90s remember Most Wanted as “that film that Regina Askia was an armed robber and her gang were all women.” That’s another film that scared me. I don’t recall most of the details but I remember one of the gang members having some kind of magic, which she uses, her palm glowing white, to lift another gang member. I don’t know if Most Wanted was directly influenced by Set It Off but both left me with a similar feeling.

I dread film deaths when the characters are played by actors I like. For years I couldn’t watch any Nollywood film with Pete Edochie in it, because, who knows, he might be an occultist and captured in the end and then die? This is also why I hoped Sansa wouldn’t die in Game of Thrones.

I am trying to recall the worst film deaths I’ve felt and I cannot.

(There is another song called “Set It Off”—in fact, there are a ton of songs on Boomplay alone—and this one is by Queen Latifah and Organized Noise, from the film’s soundtrack. I’m checking it out.)